“My Life on a Plate“, what does it even mean? 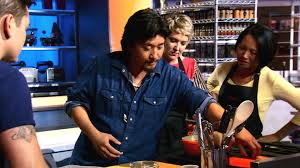 This past week we watched The Taste and an episode of Top Chef where the topic of the cooking challenge was “My Life on a Plate”. I got the feeling this concept was pointed directly at me, a message telling me I needed to get my act together and figure out just what it is I have to say with my own cooking.

The Lovely Bride mentioned I should have New Orleans influences on my plate, because it’s where I lived when I first “got into” food in a big way. While that is true, it is not necessarily what informs and influences my cooking.

I was born in Illinois, grew up as a kid in Florida – where I learned to eat raw oysters, boiled shrimp, and fish all sorts of ways – then back to Illinois for high school and college. The midwestern way of beef and potatoes became the basis of my diet in those years, basic, simple and kind of boring.  Comfort food all the time, if you will.

I tried my hand at what I thought was “fancy” cooking from time-to-time, usually to impress a girl. In the early ’90’s however there was no Internet as we know it now, and I had no knowledge of the existing cookbooks (certainly not Julia Childs or Escoffier – French food is hard!) so I would just wing it. I almost never saw my mother use a recipe or a cookbook, so I suppose it never occurred to me as a resource.

When I moved to New Orleans in ’94 I discovered a whole new world of cookery. Here my friends and their mothers were putting together complex, flavorful dishes rivaling anything I had experienced in a restaurant. Shallots, garlic, real butter, balsamic vinegar, Creole mustard – a new vocabulary and palate of flavors appeared, as if by magic. I had been ignorant of so many of these things simply because they were not available in rural Illinois at the time, or if they were I’d never been exposed to them and didn’t know to look for them. My father didn’t really like the taste of garlic so my mother rarely cooked with it. The same with spicy flavors and ingredients, I was simply never exposed to it at home, sometimes at Taco Bell…

After New Orleans I spent eight years in Connecticut, two years in North Carolina, a year in Maine and now nearly five years in New Hampshire. Once again powerful regional influences appeared – lobster, mussels and clams, more fish, and Sushi! – these had a major impact on my cooking style and palate.

It was during my years in Connecticut I developed my skills and knowledge in the hospitality business, doing some actual cooking, developing menus, watching and helping with plate-ups. Real hands-on stuff in the back of the house.

Looking back now, giving it some real thought, I suppose it was during one of the periods of crisis (ha ha ha, there were plenty of these!) during my tenure at the Wolfeboro Inn that I began to feel I should be working on the other side of the pass. So of course I left an actual restaurant manager job to become a freelance marketing consultant (I know, it just seemed like the thing to do, and I was burned out, big time). This turned out to be not-such-a-success financially, but it was a huge success for me in the kitchen.

Suddenly I had TIME, a precious commodity for anyone creatively inclined, and the motivation to practice, study and learn. Now, almost two years later, I have decided to get serious about this cookery business. We have decided we want to pursue the idea of running our own food truck and owning a small farm to retire to.

This blog is part of our plan, a place for me to share what I am learning, an accountability practice, and a marketing tool. Am I ready to present “My Life on a Plate”? Not yet. But this is the path I must follow to find my culinary voice, the creative expression of myself which has people saying, “Stephen cooked that“.